The Founding Fathers were Bitcoiners

A chief concern for any new country is securing its economic well-being. The same year that America’s Founding Fathers signed the Declaration of Independence, Adam Smith published his book The Wealth of Nations. The Declaration would usher in a new era of democracy that would change the world. The Wealth of Nations would introduce a new economic theory of how nations built economic prosperity. Both were world changing ideas, and shortly after the Founding Fathers ratified the Constitution, they turned their focus to solving America’s economic woes.

While no one denied these problems, two competing groups emerged when solutions were considered. The Federalists and the Democratic Republicans. The Federalist party, led by George Washington and Alexander Hamilton, believed that a National Bank was the only way to bring economic security, and thus, military security to America. The Democratic Republicans, led by Thomas Jefferson and James Madison, feared centralized power and slick financiers taking advantage of landowners and the agrarian South. 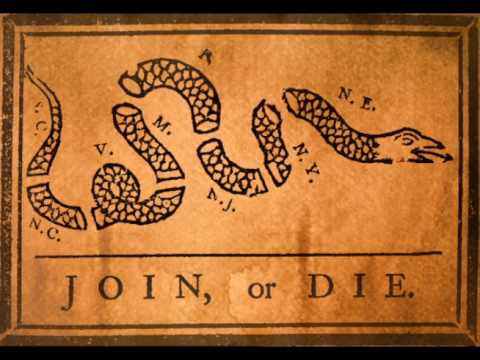 Would the National Bank dis-unite the Federal system into chaos? That would have been the opposite of Benjamin Franklin’s intention with this pre-Revolutionary meme.

The first national Bank of the United States narrowly passed Congress and was signed into law by Goerge Washington in June of 1791. It would solidify the basis of the federal government: the Constitution, The Bill of Rights, and the National Bank serving as the three legs of the stool that was the American experiment.

While the Constitution and the Bill of Rights would be celebrated for centuries to come, the National Bank would live in continuous infamy. It’s very composition would perpetuate a deep mistrust and sense of looming corruption. The bank’s opponents believed it was a grave misjustice that opened the American experiment to attacks from within; a cancerous cell that could only grow in power until a few elites would come to rule the many. Its opponents believed the National Bank was the opposite of the democratic and republican ideals laid down in the Constitution and Bill of Rights.

The fight pitted the practical application of burgeoning economic theories against the democratic and republican ideals that spurred the American Revolution. The Founding Fathers were stuck between a rock and a hard plate. The Federalist lamented that without economic security the new country would surely cease to exist. The Democratic Republicans shot back the country would fall to the same fate if a centralized and monopolistic bank were instituted.

The United States didn’t have a single currency in the late 1700s. The dollar didn’t exist like it does today. Instead, the states had a patchwork system of bank notes secured by assets in each bank’s vault. The value of these notes was backed by a merchant’s confidence that it could be redeemed for gold in the bank’s vault. Essentially, IOUs were the common form of payment.

The National Bank would create the first federal currency and boost its demand by requiring citizens to pay federal taxes with it’s notes. It is almost seems unfathomable to consider, but the United States couldn’t begin to realize it’s economic potential because it didn’t even have a recognizable currency, backed by faith in the government, to conduct normal everyday business.

Any trusted national currency would have been a boon for the economy -- the dollar, bitcoin, or otherwise -- simply because it would have facilitated trade, trust, and a better store of value as citizens sought it to pay their taxes. The clear advantage of bitcoin would have been its ability to credibly enforce a fixed supply. Inflation was rampant in early America due to speculation and money printing to pay for revolutionary war debts. Bitcoin would have quickly stabilized against foreign currencies and eliminated the patchwork of IOUs issued by state banks, just like the federal currency issued by the first National bank eventually did.

National Numismatic Collection at the Smithsonian Institution via Wikimedia Commons

As of 1791, when George Washington signed the bill to create the National Bank, the federal government did not have a well functioning Treasury. Amongst other basic things, the government could not collect taxes or pay war debts easily. The National Bank solved this but at the cost of centralized power. A decentralized currency like bitcoin, would have accomplished the same basic needs of a Treasury without centralizing power in the bank’s leadership. What could Jefferson and Madison object to if the country adopted a decentralized monetary system? The republican ideals that all are equal and have the right to life, liberty, and the pursuit of happiness would have been protected from the monopolistic powers institutionalized in the National Bank.

What would the Founding Fathers have argued over next?

The Founding fathers would have then been able to focus the discussion on important economic forces. How much freedom does the national government have to tax its citizens? When and how shall the United States raise a military? What is the proper economic balance between agriculture and industry to propel America’s prosperity? Bitcoin would have been the stable substrate to build on, better than anything anyone had ever dreamed up before.