Somewhere along the way, I became convinced that firing someone was a failure of leadership. It was my failure.

But looking back, some of my proudest moments were firing people. I recognize the pain and hardship that comes with being fired, and I don’t take that lightly, but the impact it had on my team was profound. My sense of pride comes from the lasting positive impact on the team and having the guts to make the hard call.

It took guts because the teammates I fired were award-winning-top-performers. The best of the best.

Their teammates didn’t trust them and it brought us all down. If you want to build a peak performing team, build a team with high trust. 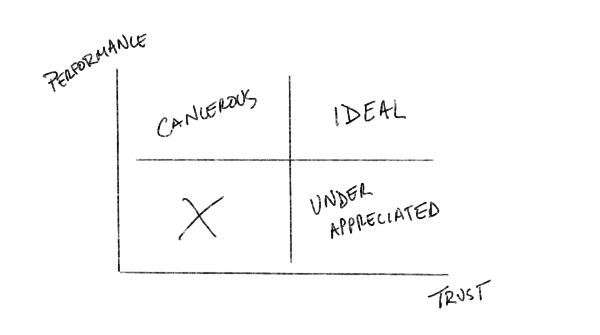 High performing but untrustworthy teammates are like a hidden cancer. It’s there, eating away at things, and it can go on for a long time before you discover it. But once you find it, you have to cut it out before it grows and slowly kills the team.

Untrustworthy teammates create hidden tension and friction. It’s hard to measure and define, but it’s there. Sometimes no one even knows that it exists until the teammate is gone. One day everyone wakes up to the fact that they spent countless hours designing counter-strategies to work around a difficult teammate that no one trusted.